The club is run on a voluntary basis. We have male and female instructors whose ongoing training is through courses they attend.

Senior grades wishing to become involved can help out in the session under the instructor’s watchful eye but to become trained instructors they need to go through a similar course structure.

No-one is able to become a registered instructor until they attain senior black belt status or age 18+, as approved by the Chief Instructor. 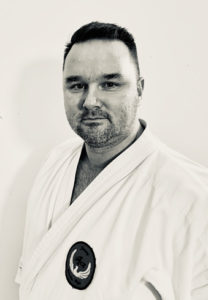 Ryan is the Chief Instructor, Chairman and co-founder of Jersey Wado Ryu and celebrated his 38th year as a black belt in March 2018. Ryan holds three Black Belts in traditional Karate and is a 5th Dan in Wado Ryu.

Ryan started is training at the tender age of five under the supervision of his father Ben and started his career with Ken Yu Kai Jersey under local instructors Sensei Doug Joseph (8th Dan) and Andy Bree.

Ryan was graded to 1st Dan in March 1988 under Sensei Terry Pottage (9th Dan), which was 2 weeks after his 12th birthday and it was understood that Ryan was the youngest full black belt in Britain at the time.

Ryan trained with Ken Yu Kai for the majority of his youth. After being asked to join Sensei Liam Ahearne (5th Dan) to start a new club at age 17, Ryan was introduced to the infamous Peter Spanton (9th Dan) and that is where his Wado Ryu path began.

Ryan has the unusual privilege to have gained every belt under the Chief Instructor of the Association/Style he trained with.

Fast forward 25 years and Ryan is now a 5th Dan, under Sensei Alan Flook (8th Dan) and an Executive board member of the Western Karate Union (WKU).

In 2017 Ryan was awarded the Sure Channel Islands “Humble Volunteer” Award having beaten (not literally!) 10,000 other nominations.

Ryan is extremely passionate about the empowerment and protection of women and has taught close protection courses for over 20 years with a focus on awareness and prevention as much as the physical element of self-defence.

Ryan has provided private one to one tutelage to women who have been the victim of sexual attacks or physical attacks and all without a cost to those involved, which he is extremely proud of.

Outside of Karate, Ryan is a father of three beautiful daughter and is a Senior Director with HSBC Bank.

Ryan is a champion of Mental Health awareness and the promotion of speaking out, especially in men.

In his 37th year of Karate we look forward to Ryan continuing to lead Jersey Wado Ryu to greater heights. 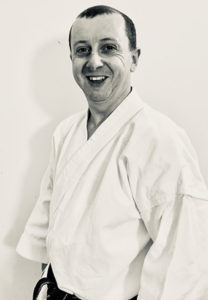 Senior Instructor is head of the technical committee and a co-founder of Jersey Wado Ryu. Steve suffers from severe arthritis which makes his lifetime of dedication to Karate and rank of 4th Dan all that more impressive.

Please note that Steve’s father, Sensei Liam Ahearne, was one of the greatest instructors to have ever taught in Jersey and JWR would not be in existence without him. 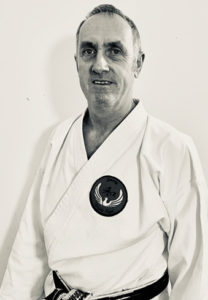 Martin is a Senior Instructor with JWR and recognised 4th Dan.

However, the reality is that Martin has over 40 years experienced and successfully ran his own club for many years until retiring briefly until he was persuaded to become a member of the senior management team for Jersey Wado Ryu.

Martin is still lightning fast and enjoys passing his knowledge to young student eager to learn. 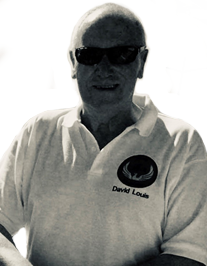 David is about as well known a Karateka as anyone in the Channel Islands.

The former President of the Jersey Martial Arts Foundation, David has been involved in Martial Arts Internationally for many years and is a retired former Director of a globally company.

David is proud to be a 2nd Dan with Jersey Wado Ryu and is often called upon to provide sound advice to up and coming and established Martial Arts clubs.

He is a valuable member of the senior team. 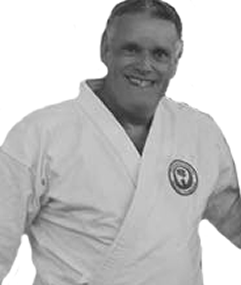 Sensei Hans Over de Vest is the chief instructor of The Wadokan Rozenburg, a Wado Ryu Karate School in Rozenburg, the Netherlands and “Special Consultant” to Jersey Wado Ryu.

Hans is a 4th Dan in Wado Ryu Karate with decades of experience and a close friend to the Jersey Wado Ryu karate School.

Always a special guest and provides fun and highly informative training sessions upon his visits.